Madikwe Game Reserve’s location, close to the edge of the Kalahari Desert, ensures a truly diverse game-viewing experience. A malaria-free area, Madikwe Game Reserve is a perfect choice for families and groups, with most of the reserve’s safari lodges offering unforgettable family-friendly accommodation options.

The reserve is a wildlife photographer’s dream. Many safari lodges have hides overlooking active waterholes. Some offer guided bush walks. All offer guided game drives (shared or private) for the ultimate bushveld experience. Game drives are usually conducted twice a day, in the early morning and late afternoon/evening, giving you a unique perspective on the reserve and an opportunity to encounter different animals with different behaviours.

One of the great joys of spending time in Madikwe Game Reserve is discovering the restorative powers of the untamed bush. Enjoy the tranquility of wildlife encounters, cool swimming pools, and rejuvenating spa treatments. Indulge in world-class dining, and spend a romantic night under the African stars at an intimate private sleep-out.

Whatever you’re dreaming of, you’ll find it at Madikwe Game Reserve. Enquire now to find the safari lodge that best suits your unique requirements. 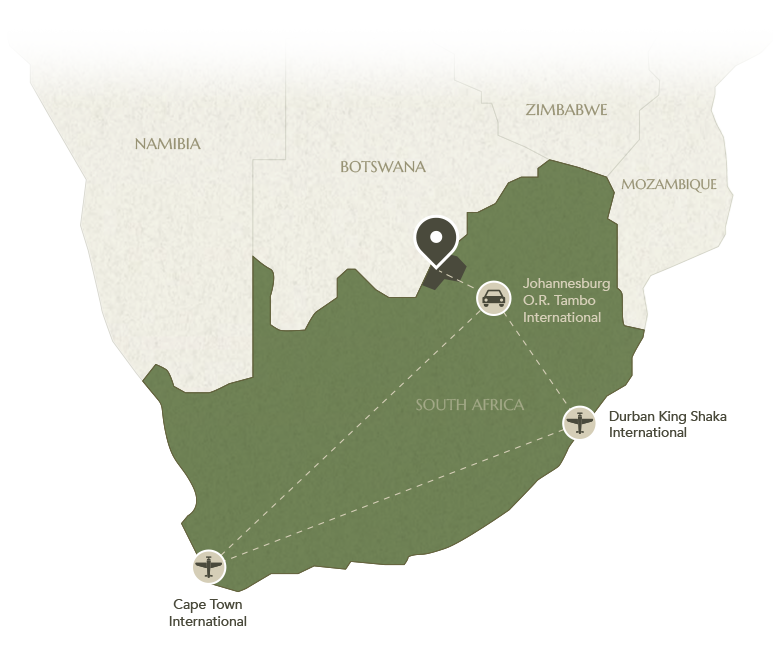 Maps of the Area

We arrange chauffeured road transfers from your airport of arrival, directly to your chosen Madikwe Game Reserve safari lodge, as well as charter flights to the reserve’s airstrips. Federal Airlines provides a daily seat-in-charter flight service that flies into both the Eastern and Western Airstrips in Madikwe from OR Tambo International Airport.

Madikwe Game Reserve has five entrance gates: Molatedi, Derdepoort, Abjaterskop, Wonderboom and Tau. Road transfers and self-drive guests will be directed to the gate closest to their destination safari lodge. Driving time from Johannesburg and Pretoria is an easy 4- to 5-hour drive, depending on the gate. Madikwe Game Reserve is also easily accessible from Gaborone in Botswana, which is just 1 to 2 hours away by road, depending on the gate.

Madikwe Game Reserve is large, covering 80 000 hectares of spectacular African landscape, ranging from the Dwarsberg mountains in the south to the Inselbergs in the west and the Marico River in the east, with vast open plains in between. Here, the famous Big 5 – lion, buffalo, leopard, elephant, and both black and white rhino – roam, along with giraffe, African wild dog, brown and spotted hyena, and cheetah.

The reserve is also home to several antelope species, as well as mammals ranging from aardvark to zebra – with porcupine, warthog, and bushbaby in between. More than 350 species of birds have been recorded here, with migrant species visiting Madikwe Game Reserve’s trees and wild grasses throughout the year.

Shade, food, and habitat are provided by over 45 different tree species, and as the reserve is made up of multiple veld types – including mixed bushveld, Kalahari bushveld, arid sweet bushveld, and thornveld – the mosaic of vegetation and grasses is entirely unique.

The density and diversity of Madikwe Game Reserve’s natural treasures must be seen to be believed. Large herds of elephants, towering giraffes, bounding springboks and curious, cackling hyenas fill the vast, open plains. This is the picture-book Africa, as you dreamed it would be.

The summer months (from August to March) bring brief but refreshing afternoon thundershowers. The town has an above average rainfall of 300 to 700 mm annually. Summer temperatures range between 22 and 34ºC and winter brings with it dry, sunny days and chilly nights. The average winter (from May to July) temperature is 16ºC but can range from an average of 2 to 20ºC in a single day.
21°C
Tue
Partly cloudy
57%
1011
9 km/h

What to Pack for Safari

Be The First To Know

Tap to select the previous period
Next

An unforgettable African experience, crafted just for you.